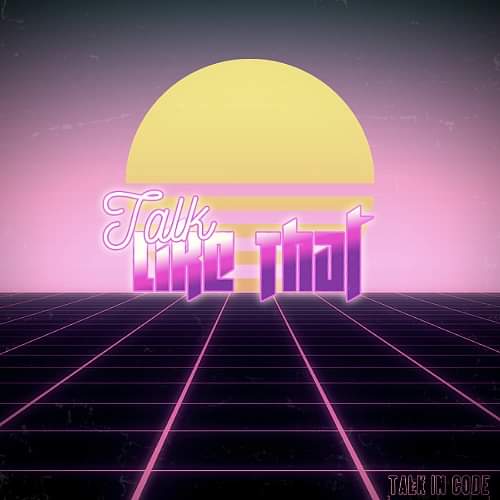 Swindon’s indie-pop four-piece Talk in Code have a new single pending, which will blow your diddy-boppers off…..

Okay, six seconds into Swindon-based anthemic indie pop darlings, Talk in Code’s new single “Talk Like That,” and these old ears are blessed with an intro which drifts me back to electronic synth-pop of the eighties. If I stated near on a year ago, when mentioning their second album Resolve, their sound wouldn’t feel out of place in a John Hughes movie, with Molly Ringwald and Anthony Michael Hall sauntering an American high school corridor, this only cements the imagining in concrete.

What you had in that era is unchartered territory; electronics in music was nascent, but cradled by the inspired it swept a new wave over yearning youth. Misunderstood by the elder generation and abused later by the hit factories, the essence of the eighties sound we typecast today was built on those early foundations, why? Because those songs were beguiling, catchy and danceable, and that’s why Talk in Code compare.

Let’s talk Simple Minds, Blancmange, Tears for Fears, yet I beg to differ to a contrast to the Pet Shop Boys on their press release, arguing their expansive success drew on a rather timeworn formula, and Talk in Code maintains an element of contemporary indie freshness. Retrospection maybe big business, this is far from an eighties tribute act. Though, akin to my comparison of Hughes’ movies such as The Breakfast Club and Pretty in Pink, the subject offers a romantic ‘chase,’ and as the band put it, “a feeling of longing.”

Make no mistake, this is a blooming marvellous and natural progression for Talk in Code, and I expect great things from them this year. They’ve notched up fifteen festival appearances over the UK during last summer, most notably opening the main stage for Years & Years at M for Festival and playing the main stage before Scouting For Girls at Wychwood Festival. They’ll be supporting Matt Owens (Noah and The Whale) at the Frog & Fiddle, Cheltenham on 31st January before heading out on a string of festival dates this summer including Minety Festival, Daxtonbury and many more.

But this single, Talk Like That, from a forthcoming EP to be released later this year delivers. Recorded and mixed at Studio 91 in Newbury (Supergrass, Fickle Friends, Bring Me The Horizon, Amber Run), will be released on 27th February and highly anticipated by their fans, dubbed “Talkers.” Do yourself a favour, become a Talker!