Way to go Augustus Gloop, fell in to the river of chocolate. I like to think August was named after him, and when it comes around, we should all go jump in a chocolate river; c’mon, be something to do.

Unfortunately, I haven’t seen a local event in the climatic summer month offering such an attraction, but there is a truckload of gigs to keep you from getting sucked up a pipe and carried off the boiler room of boredom. Personally, when it comes to Dahl’s gluttonous stereotype characters, I’m more of a Bruce Bogtrotter kind of guy anyway, and strive to me more like him every day.

Enough waffling, here’s our recommendations for said truckload. Note our website is updated all the time, so please keep up. This article, also, is dedicated to gigs, Devizine lists all events on our calendar, if you’re looking for stuff to do with the kids this summer hols, see here.

Swindon’s lo-fi flour power dream pop duo, Illustrations have their debut album “Make Fun” launch at the Vic in Swindon on the first of the month; free entry with Sister Bliss, Zero Gravity and Tea Ceremony as support. Prime music haven, The Vic, for the following night, Friday, sees Sheer Music team up with Brandit to present London-based Familiar Spirit, Rugby’s War, Immerse from Bristol and Swindon hardcore bands Heriot and Homeland. If Hardcore rock isn’t for you, Shaw Village Inn has our friends People Like Us.

Meanwhile, loads on in Salisbury for their Pride festivities. Devizes Southgate has the one and only Jamie R Hawkins, who comes with homegrown super-team Phil Cooper, Tamsin Quin, Vince Bell and Pat Ward; thoroughly Devizes, thoroughly recommended. After my visit back to the regenerated Barge at Honeystreet, there’s galloping, gypsy, boat-folk, Calico Jack, on Friday. If that doesn’t grab you by the mooring post, Saturday 3rd sees reggae steppers, The Urban Lions launching an album down there with a live set and their Lionheart Vibration sound system as backup. It’s free, worth camping for £8.

Those Three Crowns is the place to head Sunday 4th, Devizons, People Like Us will be there, hosting an afternoon for Julia’s House, with contemporary local hero guests, Tamsin and Vince. The Mike Hoddinott Blues All-stars are playing The Three Horseshoes in Bradford.

Of course, lucky Boomtown campers will start to arrive in the following week, but for the rest of us, Vinyl Realm has their regular Wednesday Vinyl Listening Night at The Lamb and there’s Open Mic at The New Inn, Semington. Thursday, head for the Cellar Bar, Devizes, where George Wilding plays a special gig in aid of Liam’s campaign. Read Liam’s story here, and please, it’s three quid on the door, guys; see you there. 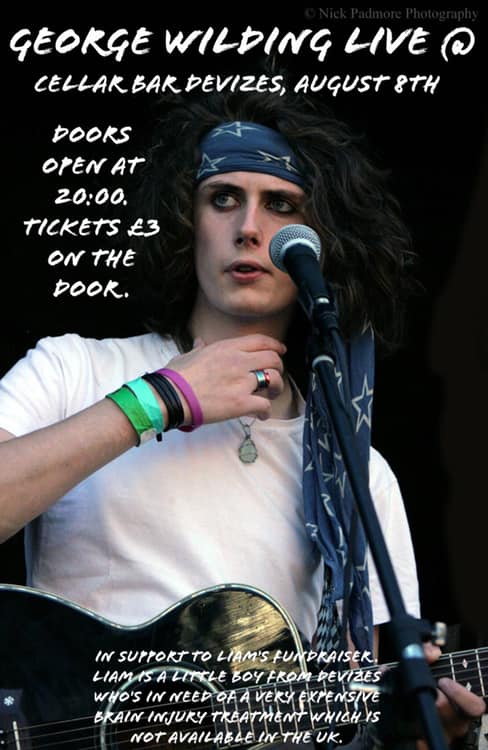 Friday 9th is the start of Marlborough Rising with Tony O’Malley Band & Little Geneva at the Town Hall and A Musical Jukebox @ St Mary’s. Meanwhile, Absolute Blondie are at The Swiss Chalet, Swindon.

“Cosmic Blues featuring broken guitars, shamanic percussion and whisky soaked original songs of salvation, damnation, lost dreams, hope and love,” is the strapline for The Bone Chapel who’ll be at the Southgate on Saturday 10th, and Devizes also has mini-fest at the Cavalier Community Hall. Times Square fires up a barbie, with profits from £10 tickets going to the Devizes & District Opportunity Centre, it’s a varied line-up for a great cause. 1pm – ukulele band, Demugpugs, 2pm – Sound Affects, 5pm – Beautiful Trauma – Tribute to P!NK, 8pm – The Stories, 9pm – The Blue Rose Band, 10pm – No Middle Ground Band with a disco to end.

People Like Us play The Owl, and further down the road, the Lansdowne Arms at Derry Hill have a Caribbean and reggae festival, promising live music but just who seems to be secret! Marlborough Rising has a Rising Talent contest and George Wilding supports Echotape at the Town Hall. Swindon’s turn to have a Pride festival that weekend, The Wurzels are Back on The Farm near Salisbury and there’s always the Radford Mill Farm Rhythm and Blues Festival near Bath, I think Ruzz will be there.

If July’s Sunday jaunt at Hillworth for Fantasy Radio wasn’t enough for you, they’re back for a Lark in the Park Sunday 11th. Again though, exactly what happens is an online mystery. Definitely though, Sunday assembly at the Southgate comes from former Katrina & The Waves guitarist Kimberley Rew, and his wife Lee Cave-Berry accompanying him on bass. Here’s hoping Devizes will be walking on sunshine (he wrote that.) And George Hinchliffe’s Ukelele Orchestra of Great Britain sees the Marlborough Rising finale at the Memorial Hall. If in Calne though, The Jenny Wren’s jam session may suit.

Another weekend, another spree to the dependable Southgate, who have Broken Bones Matilda on Friday 16th. Meanwhile, over at the Cavalier Community Hall, there’s a tribute to AC/DC called Hells Bells. Rob, Mike and Luke, you know, got a Nerve Ending, well, they’re out to the Neeld, Chippenham supporting Brighton’s three-piece, indie punk outfit Gender Roles with Laissez Faire. Oh yeah, The Chaos Brothers play the Queens Tap Swindon an’ all.

Saturday 17th and the indie-pop band we’ve been raving about but yet failed to catch up with, Daydream Runaways, play the Barge at Honeystreet. The Corsairs make a welcomed return to the Southgate, and over in Warminster’s Prestbury Sports Bar, The Treblemakers are always worth the effort.

For a tribute to the music of Paul Weller, The Tap & Barrell has Wildwood, harder rockers of Swindon, head for the Vic, where Saints of Sin play, and for ska-punkers, The Hamsters From Hell are at The Rolleston.

But if this weekend is the quiet before the storm, Devizes starts bank holiday celebrations early, as it’s DOCA’s turn to hijack Hillworth Park on Sunday, for the Party in the Park truly kicks off the shenanigans. Free, from midday to half five, Bristol’s The Desperate Men brings the ground-breaking outdoor theatre with a water balloon toss, The Gin Bowlers offer “Swing & Vulgar Beats,” Andy Quick is described as a soul punch of indie, rock n roll, and electro blues. Old Baby Mackerel play bluegrass music that makes you “yee-haw” harder than a 9-pound hammer, and Ozzy Murray Kyle brings us some conscious roots and soul.

Other events on Sunday worthy of our attention include Six Lives Left at The New Inn, Melksham and Jo Harman Trio at Bath’s Chapel Arts Centre.

Following weekend then, and it’s the big one. Dire Straits tribute the Sultans of Swingers are live at the Talbot, Calne on Thursday 22nd. While Friday, Frank Zappa tribute, Burger & the Beast are at the Rising Sun, and rock covers band, Beyond the Storm are at Devizes Southgate, and The Barge at Honeystreet starts its Argy Bargee festival in its campsite. Awesome line-up for that, see the poster below or read our review of The Barge from earlier this week.

Saturday the 24th August then, Phoenix Festival starts in Cirencester, absolutely free this one, two tributes headline; The Rolling Clones and Totally Tina, with a host of other bands including The Britpop Boys, The Soul Destroyers and The Strays.

Meanwhile, The Reason, at The Rose & Crown in Warminster comes recommended, so too does those Larkin boys, but you knew that. They’re at The London Road Inn, Calne. The Other at The Grapes in Melksham, and something different for the Southgate, Devizes, as they welcome Sophia & The Soul Rebels, who also play the Woodland Edge, Swindon on the Sunday.

Staying in Swindon, The Tawny Owl have a music and family fun-day. Closer to home, it’s the Potterne Beer Festival and in the Vize, get ready for the International Street Festival. On the Green Sunday, highly advised you finish it off with Vince Bell at the Southgate, easing you into the legendarily dubbed (whether DOCA like it or not,) “black rat Monday,” in the Market Place on the bank holiday Monday.

Now you know full well, DOCA will shoot me in cold blood if I expose what’s on at the Market Place, and for that reason, I’ve deliberately left myself in the dark too. Buy the programme which will be on sale soon! But going on past experience, I’m sure you’ll agree the diversity and class of all acts booked are second to none. Not forgoing, Vinyl Realm is extending the site to their shop on the corner of St Johns and Long Street with a second stage, and I am able to tell who we have booked there, and I already have, as I said, please keep up: the lowdown is here, don’t make me repeat it!

One more weekend then you can go get on with your July. Friday 30th August is when the Canal Trust and DOCA get together for Music on the Canal at the The Wharf. Again, we see Daydream Runaways pop-up, this time at The Southgate. A weekend of classic tributes elsewhere, Melksham Assembly Hall has The Showdown; Elvis v Jerry Lee Lewis, while The Neeld, Chippenham has The Beach Boys Tribute Show.

Saturday, yes SATURDAY, the 31st is the Devizes Confetti Battle & Colour Rush, despite this article being a gig guide, thought I’d mention it as we talked of our fortnight of fun, and this, for some, is the icing of the cake. Mods and scooterists head for The Flying Monk Tavern, Chippenham where The Roughcut Rebels always put on a great show. Local Heroes Inc are also on my recommended hotlist, they play The Pilot, Melksham. The Kut, Seething Akira plus guests at The Victoria may also interest you.

To finish on a high note, August 31st all roads lead to Frome. This is a free fest at The Cheese & Grain, 12pm – 11pm, courtesy of Hit or Miss & Sheer Music. One day, twenty acts over two stages. With ten more cats to be confirmed, The “Hey Didn’t the Foo Fighters Play That Stage” Stage is missing a question mark, but replaced by The Bottom Line, Ghost of the Avalanche, The Big Massive Orchestra, Middlenamekill, and Hoggs Bison. The “I Knew Frank Turner Before He Was Famous” Stage has Dave McPherson (Inme,) Follow the Sun, Mike Barham, L. Stidson, and Amateur Panda.

That’s all folks, next thing you know, Christmas; pass the yule log Bogtrotter, you greedy porky.

Crusader Vouchers to the Rescue!

The Ladies Shout as I go by, oh Danny, Where’s Your Facemask?! 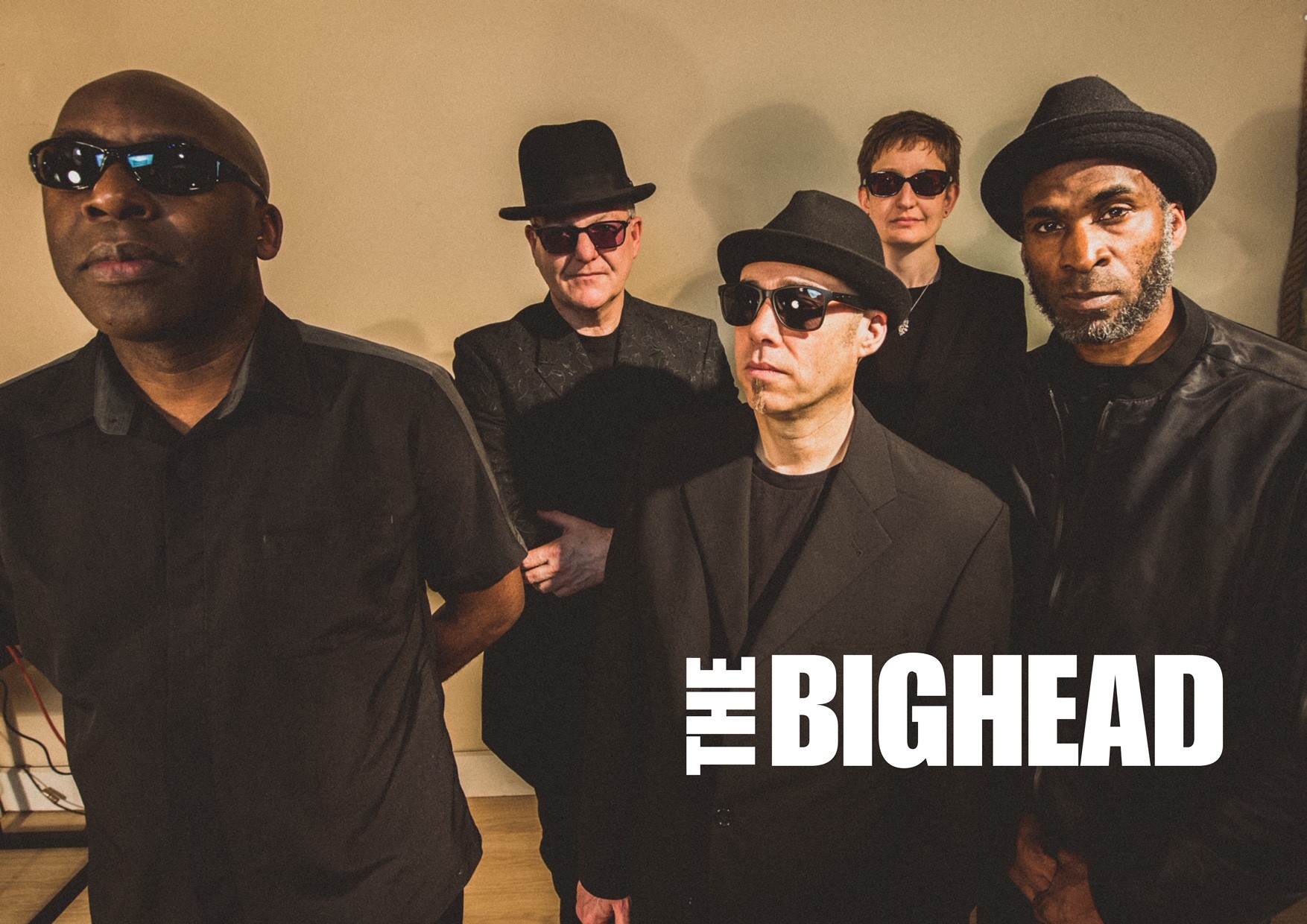